The analysis of an electric vehicle’s full life cycle shows that its environmental impacts are much less significant than those of a gas vehicle. This is especially true in Quebec, where a vehicle that runs on hydroelectricity emits up to 80% less greenhouse gases than its gasoline equivalent.

But the fact remains that compared to a gasoline or diesel vehicle, an electric vehicle represents a real solution to decarbonize transportation... and even more so in Quebec.

To compare an EV to a gasoline vehicle, we use the “Life Cycle Assessment” (LCA) which compares the vehicle’s various impacts over its entire lifespan, from mineral extraction to final recycling, including manufacturing, transportation and the energy that powers the vehicle.

The impact of the electric car, compared to the gasoline car, is always measured by taking into account the vehicle’s longevity and use.

Consequently, a 2016 CIRAIG study showed that after 300,000 km, the EV’s impacts were up to 80% lower in four areas: human health, quality of ecosystems, climate change and depletion of fossil resources. 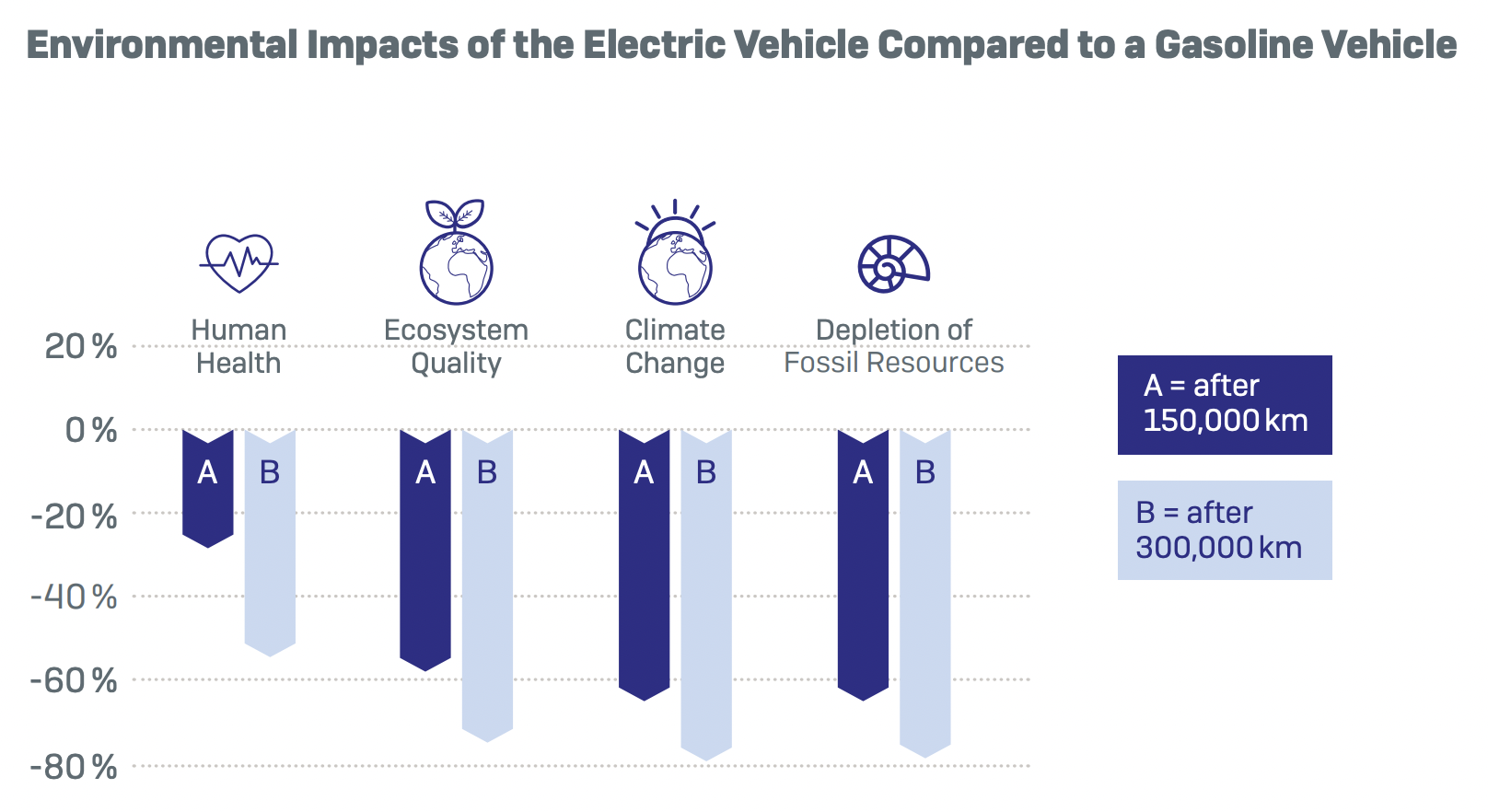 NOTE: The CIRAIG study did not take into account the additional impact reduction that the circular industry will allow thanks to the recycling of batteries.

Other recent studies point in the same direction

TThe vast majority of scientific studies support electrifying transportation. For more information, you can consult three of the most enlightening resources on the subject:

Electric vehicles that are getting cleaner and cleaner

Gasoline vehicles are getting increasingly dirty

Today, manufacturing a gasoline-powered car has a smaller impact than producing an electric vehicle. But the trend has been reversed in recent years as gasoline-powered cars become more efficient through increased hybridization (with electric motors and batteries) and the use of light metals and composite materials.

More importantly, the gasoline that powers vehicles is becoming dirtier. The share of conventional oil (the kind that bubbles up from the earth on its own) is becoming scarcer as new deposits become increasingly rare. The "peak" of conventional oil is said to have been reached in 2016 and 2018. We are now entering the era of non-conventional oil: "shale oil" and "tar sands", which are very polluting to produce. In Quebec, 100% of the oil that fuels our cars comes from the tar sands of Alberta and from shale oil wells in the United States and Western Canada.

The EV battery and its end of life

The circular industry of recycling batteries is just starting and the batteries of tomorrow's electric vehicles will have even smaller environmental impact, since they will be partly made using batteries from today's vehicles. At the end of their lifespan, batteries can be reused for energy storage purposes. The Quebec company Recyclage Lithion has developed an efficient process to recycle lithium-ion batteries, which should be operational soon.

All the details are here (hyperlink to secondary page)

The source of energy to recharge the battery